Years ago, I decided that grief is, for the most part, selfish.  It's an acknowledgement that there is a void in your life that will never be completely filled again.  You regret actions not taken, words not spoken or potential not reached.  You have a list of things you'll miss about the person you've lost.  At its core, it is a change in our lives and we view the loss through the filter of how it will impact us.
Grief is for the living.
I've been very selfish recently, grieving a man I can't claim to know and only met once, however meaningful that single meeting was to me.
Canadians lost a gifted public servant on August 22.  Yes, we knew the Honourable Jack Layton, Leader of the Opposition, was ill, but we kinda learned to believe in miracles where he was concerned.  I know I'm not alone when I say that I really did expect another one and it's a struggle to get my head around the void he's left.
It's daunting to consider that the weight he carried as a leader has been returned to us.  The work we expected him to do is now in our hands, on our shoulders, and I've wondered if we are equal to the task.
We aren't rudderless, really, as our shared values directed him.  What we lost was our standard bearer, the charismatic face of our principles that engaged so many with our message.
I've been worrying that the momentum would ebb, because some people were engaged less by the message than the messenger.  Those who voted for Le Bon Jack, rather than the NDP, would drift away, seeking more familiar harbour.  I've been wondering what I can do to prevent that.
Then, I saw something that stopped me in my tracks, stilled such thoughts, shattered my heart and moved me into, then beyond, tears with the sheer poignancy of the moment.
It's a photograph by Chris Mikula of the Ottawa Citizen I'll try to reproduce here but if copyright law slaps me, it's here (hopefully forever). 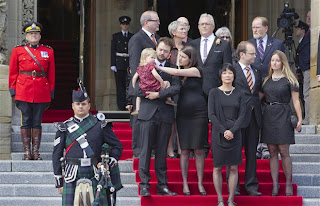 The caption:  "The family of Jack Layton watches as his body leaves Parliament Hill in August 25, 2011 en route to the funeral in ."
There are 17 people in the photograph, but I only noticed one.
On the red-carpeted stone steps, Olivia stands in front, alone, holding her own empty hands, gazing to her right.  Her step-children stand behind and above her, their attention on child or fiancee.  It seems the caption is incorrect:  She is the only one watching.
As I have too many times this past week, I melted.  My face burned with the shame of my selfishness as I imagined her thoughts at that moment; was she thinking of the many tasks before her?  Recalling memories that remain only in her heart?  Or simply repeating a mantra of "Keep it together.  You can cry later.  Not now, Olivia, not now."
Yes, we lost a leader, a spokesman, and that's rough because it means we have more work to do.
Olivia lost her husband, the man who shared her heart and life, who made her laugh and cry, finished her sentences, read her mind, fought with her and loved her and shared jokes with a glance.  They were supposed to grow old together, enjoy a houseful of grandchildren and great-grandchildren, recall long years of public service, write their memoirs and, finally, many years from now, leave this life quietly and peacefully, together, because that's the way all great love stories end.
For me – and my admittedly strong imagination – it's a powerful photograph that captures a moment of sadness, grace and sacrifice.
Throughout this week, many have commented on the warmth, generosity and composure of this remarkable woman.  She walked among mourners, accepted their grief, comforted and embraced strangers as if their loss were no less significant than her own.
As a Canadian Leftie, while I've always respected Ms Chow's ability as a strong MP in her own right, I have to admit I viewed her as part of a package, like a political "Bennifer" – one half of a couple that worked in the same field to accomplish the same goals.  Meeting the two of them a couple of years ago kind of cemented that, as people flocked around her husband for words and photos while she remained nearby, content to be on the edge of the spotlight.
It's shining on her, now, as she mourns a great, personal loss, and I can only imagine how difficult it must be to grieve in the spotlight, your picture taken a thousand times and posted in seconds for anyone to scrutinise.  What is it like to be in that place, knowing missteps will not tolerated?  To know that for every kind thought and word, there will be an opposing one spoken, tweeted, blogged, posted and texted about you, or the man who shared your life?  How do you find the strength to maintain composure, to be dignified and human, rather than cold and stoic?
Yes, Jack Layton was a great man, respected and admired by more people than he may have realised.  But, this woman that he loved, well, I think more of us have discovered why:  La Belle Olivia is pretty damned great, too.
Posted by Sallie Caufield at 11:56